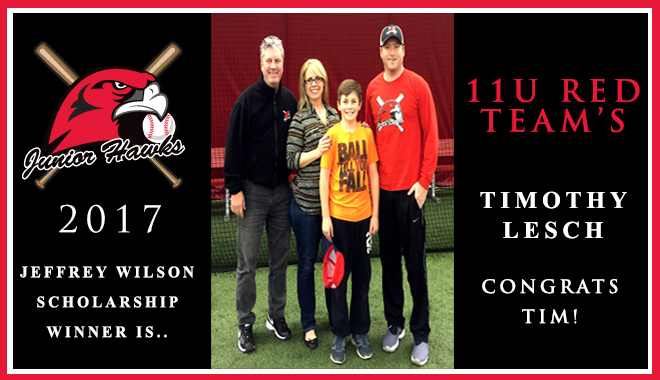 One winner will be chosen by the Board and announced on the website prior to the start of the season.

About Jeff Wilson
Jeff’s love of sports started at a young age with playing baseball, basketball and hockey. Jeff started playing baseball in the streets and school yards in Chicago. Jeff first joined organized baseball in a Pee Wee League at Shabbona Park. Upon moving to Rosemont, Jeff joined the Devon-Higgins Little League and the Park Ridge Little League.  His passion for baseball continued into adulthood, where he played both 12 and 16 inch softball in various leagues and tournaments. One of the tournaments that Jeff enjoyed routinely taking part in was a police and fire tournament that benefited local charities, along with the Special Olympics and the Illinois Burn Camp. Although a fierce competitor, Jeff believed sportsmanship was the most important part of the game.

Jeff was devoted to his wife Cindy and their sons Patrick Nicholas Cole and Brody. They were the center of his life. He was always involved with his sons as they played baseball or other sports. In 2011 Jeff, along with Mark Civitella formed the Leyden Eagles 9U Travel Baseball Team. Jeff’s vision for the team was to focus on the children and create an environment where they could have fun and learn the game. The team later became the Park Ridge Junior Hawks.

Jeff was dedicated to his community. He was a Lieutenant with the Rosemont Public Safety Department where he served with pride for almost fifteen years. As a Public Safety Officer, Jeff was a police officer, a firefighter and an EMT. He held many specialized assignments throughout his career such as SWAT and K9 Officer.

Jeff had a huge heart and gentle soul. He was committed to helping people, whether it was a family member, friend, or citizens he contacted while working.  Jeff loved playing baseball and serving his community. He was also an avid White Sox fan. Jeff would be honored to know that his name is attached to this scholarship, which gives a child the opportunity to play this great sport.